Crisis Text Line offers help to those in need, one text at a time. 01:21 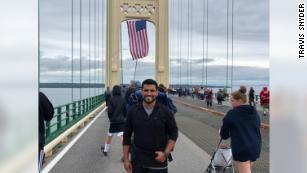 A Marine veteran walked over 800 miles in 42 days for veteran suicide awareness
Researchers looked at survey data from 198,540 high school students from 1991 to 2017 from the US Centers for Disease Control and Prevention's Youth Risk Behavior Survey. Among high school students of all demographics, 1 in 5 said they were thinking about suicide and 1 in 10 said they had made a plan to carry it out. That's despite the "increased attention given to the creation of campaigns to reduce youth suicide in the United States over the last decade," the study found.
The authors found an increased risk in reported suicide attempts among African-American teens between 1991 and 2017, and boys saw an increase in injuries related to those attempts. That might mean that black teens were using more lethal means when attempting suicide, the study said.
Every year, 46 million Americans deal with mental illness. Only 41% get help. Here's how you can.
This study is in line with earlier research that has shown African-American boys, especially younger boys between the ages of 5 and 11, have experienced an increase in the rate of suicide deaths. In black children ages 5 to 12, the suicide rate was found to be two times higher compared with white children.
While suicide is an increasing problem for African-Americans, non-Hispanic American Indian or Alaskan native boys and girls had the highest rate of suicide. In 2017, it was 26.22 per 100,000 teens, and 12.21 per 100,000, respectively.
Among girls, there was a statistically significant decrease in suicide attempts from 1991 to 2017. There was not a similar decline among boys. There was also a decline in attempts overall among teens who identified as white, Hispanic, Asian American or Pacific Islander.
To get help
Call the National Suicide Prevention Lifeline at 1-800-273-TALK (8255).
There is also a crisis text line. For crisis support in Spanish, call 1-888-628-9454.
The study did not determine what was behind these trends. Other research has found that stressors such as bullying, family abuse and mental health problems such as depression put teens at higher risk of attempting suicide and dying by suicide, as does confusion over sexual orientation or gender identity.
"Over time and particularly with black boys, we have seen this troubling trend in a couple other studies. The fact that we are seeing this, especially with younger ages, is concerning," said Amy Green, director of research for The Trevor Project, a suicide prevention and crisis intervention organization. Green is not affiliated with the study. "Because so much of this is newer, there isn't a lot of data about why, but some of the factors are stressors like discrimination and the experience people have with discrimination and microaggressions."
Green added that there is also a lack of access to mental health services for youth of color.
"Discrimination [and] racism is a problem and it's compounded by this lack of access to care," she said.
Get CNN Health's weekly newsletter

Suicide is still relatively rare and hard to predict, according to the American Psychological Association, but it says there are some warning signs: If someone is talking about suicide; if they have experienced a recent loss, like the death of a friend or a divorce; if the person seems different; if you notice a change in their usual personality or behavior; or if they tell you they aren't sleeping a lot or have a change in eating habits. Low self esteem, lack of hope for the future, or if they talk a lot about their fear of losing control -- these can all be warning signs.
Green adds that asking people if they are thinking about suicide does not prompt them to act.
"People checking in and asking if someone is OK, or even asking directly about suicide can help. And it's important to help connect them to resources," Green said.